Skip to content
The healing that takes place when soldiers are reunited with their buddies after being separated by injuries sustained in combat (and the treatment which follows) makes for very rewarding missions, as some have experienced. The impact of the mission described below can only be imagined by those who have suffered the sudden and permanent loss of a comrade or family member in our nation’s defense. Try to put yourself in the place of a family wanting to know about the last 10 months in the life of their son thru the eyes of his Platoon Leader. That’s what the mission described below was all about. As it was a “round robin” trip returning to MN, I was fortunate to be able to accompany the young LT., meet the families, as well as three of our volunteer pilots. I KNOW what we do makes a difference. I only wish all Americans could have shared my experience that day.
Read on to find out what Seth had to say about the mission…. 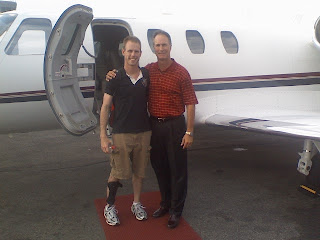